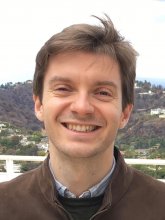 Originally from Edinburgh, Scotland, James is an engineer by training and a physicist by vocation. He graduated in 2012 with an MEng in Engineering Science from the University of Oxford, having specialised in electrical, electronic, and control engineering. He completed his PhD, an interdisciplinary collaboration between the Departments of Engineering and Physics, in 2017 as part of the NanoDTC. Between 2017 and 2020, James held postdoctoral positions at the Adolphe Merkle Institute, Fribourg, Switzerland, and the Institute for Molecular Engineering, University of Chicago and Argonne National Laboratory, USA.

James’ scientific interests lie at the intersection of nanophotonics and soft matter physics. He has investigated ways to use the (directed) self-assembly of liquid crystals and block copolymers to create two- and three-dimensional optical metasurfaces and metamaterials with dynamically reconfigurable optical properties. During his PhD, James used thermal and solvent vapor annealing to create gyroid-structured optical metamaterials with long-range order from linear triblock terpolymers, and characterised the unusual crystallisation behavior of the polymer templates and the anomalous optical properties of the resulting metamaterials.

As a research fellow in science communication at King’s College, Cambridge, James is interested in how scientists’ conceptions of science—what it is, how it works, and what its for—affect how and why they communicate their science. In particular, he focuses on science communication with policy makers, working in collaboration with the Centre for Science and Policy (CSaP); and, together with students in Cambridge and collaborators at Brunel University London, investigates improv comedy as a novel public engagement technique.

James is a co-creator, -host, and -producer of the University’s podcast, Mind Over Chatter.