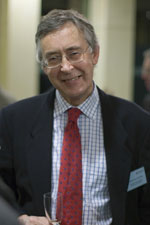 From 2001 to 2017 Ian Hutchings was the GKN Professor of Manufacturing Engineering in the IfM. He has been Emeritus Professor since October 2017. He is also a Fellow of St John’s College and Chairman of St John’s Innovation Centre Ltd.

In 2005 he founded the Inkjet Research Centre in the Institute to investigate the science and technology which underpin this important industrial process. Major projects in the Centre which involved extensive collaboration with industry and other academic research groups included ‘Next generation inkjet technology’ (EPSRC, 2005-2010) and ‘Innovation in industrial inkjet technology: I4T’ (EPSRC, 2010-2015). Outputs from these and other projects are summarised at http://gtr.rcuk.ac.uk

Other research interests include the application of tribological principles to manufacturing processes, surface engineering and all aspects of the tribological behaviour of materials. He is co-founder and co-director of the highly successful Cambridge Tribology Course which runs annually and provides an intensive three-day grounding in the subject.

Ian is the author of a widely-used textbook, ‘Tribology: Friction and Wear of Engineering Materials’ first published in 1992, and recently published in an updated and expanded second edition (2017), as well as numerous journal and conference papers. Other books include ‘Inkjet Technology for Digital Fabrication’ (Hutchings and Martin, eds., 2012).  In 1994 he was awarded the Tribology Trust Silver Medal, in 2000 the Donald Julius Groen Prize by the Institution of Mechanical Engineers and in 2007 the Staudinger-Durrer Prize by ETH Zurich. He was Editor-in-Chief of the international tribology journal, Wear from 1998 to 2012. He is a Fellow of the Royal Academy of Engineering.