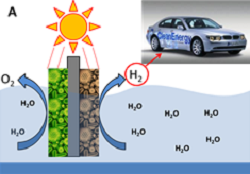 Understanding how natural biocatalysts extracted from bacteria can be used for solar driven water splitting and optimising them for utilising hydrogen generation as the future fuel.

Sunlight provides us with a practically inexhaustible flow of energy, and the photochemical conversion of solar to chemical energy (e.g. hydrogen) attracts much interest. Direct conversion of solar energy to a fuel is important, because the majority of the world’s energy is used in the form of a fuel, and not electricity.

My research focuses on combining recent advances in the field of nanotechnology and nature-made machines to efficiently produce hydrogen, which is a fuel of the future. Nanotechnology allows us to manipulate matter on the smallest scale, enabling many opportunities. We use self-assembly to fabricate high surface area electrodes: an array of nano-sized spheres is assembled on a substrate using capillary forces and this acts as a template to grow an electrode around them. After removal of the spheres, high surface area electrodes are obtained which support many more catalyst per square centimetre than the conventional electrodes, assuring high efficiency of our devices. The catalysts which make water splitting happen are directly extracted from biological systems. Catalysts for the oxygen-producing half-reaction are taken out of cyanobacterium and are the so-called ‘Photosystem II’. The hydrogen-producing half is driven by enzymes called hydrogenases, extracted from bacteria of the family Desulfomicrobiaceae. We are able to investigate these processes directly in our devices.

With this research we aim to gain a better understanding of such biological catalysts and the way they interact with the artificially-made materials, so we can make better solar-driven water splitting cells.