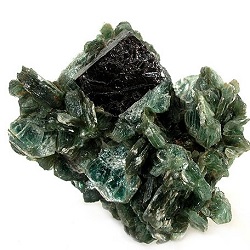 On the micro and nano scale, rocks familiar to us are not so cold and hard as we know them – they are continually twisting and bending from the heat around us, just like a lizard in the sun.

In my research, I study the twisting and bending in a particular type of rock, known as perovskite, which can be found all over the world. Using an extremely fast camera, which effectively takes a million billion snapshots over a single second, I watch the perovskite dance.

This camera has two laser beams which hit the material at different times. The first laser imprints a property of light, known as the polarisation, into the material and the second laser checks for this imprint.

Measurements of these movements allow us to understand how the perovskite interacts with light, enabling us to fabricate more efficient devices which rely on these interactions.

Major advances have already been made in the efficiencies of perovskite solar cells, light emitting diodes and lasers.