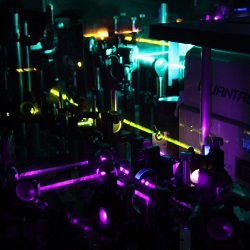 Solar energy is one of the fastest growing renewable energy sources in the UK and the government has recently forecast that it could provide 4% of the UK’s energy in a decade. This growth has been driven by rapid reduction in the cost per watt provided by solar panels and at the Cavendish Laboratory in Cambridge we are working on technologies which will continue to reduce this price  by splitting packets of light in two.

In a conventional solar cell, the absolute efficiency of the device, how much of the sun’s energy is converted into electricity, is limited to around 33% the so called Shockley-Queisser limit. Some of this is due to intrinsic losses which can’t be avoided however the majority is the loss of energy to heat. The way a solar cell operates means that all colours and energies of light absorbed generate electrical current at a constant voltage. As a result, a packet of high energy light generates just as much electrical power as a packet of low energy light and the excess energy is converted into heat by a process known as thermalization.

We  aim to bypass this thermalization step by using an even more rapid process which occurs in some specially designed materials which allows rapid conversion of packets of blue light into two excitations of half the energy by a quantum mechanical process. The challenge I work on is to convert these excitations into a useful form of energy. I design and make materials engineered on the scale of atoms and molecules which efficiently convert these excitations into red light which can be absorbed by a conventional solar cell. If we can harness this process effectively we could break the fundamental efficiency limit of solar energy increasing it by as much as 10%.