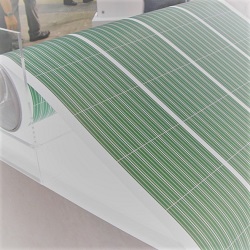 One of the most promising renewable energy sources available is solar power. The sun produces enough energy in an hour to satisfy global energy needs for an entire year. The ability to harness this energy to create electricity is one of the key problems facing researchers today. However, conventional solar cells aren’t working. They are ugly, look like they’ve just been plonked on to a roof, and inherently have don’t convert sunlight to electricity very efficiently.

Many groups  – both within companies and universities – have explored different solutions to the problem.

We use materials that have a high sunlight-to-electricity conversion efficiency – so that very little light is wasted. These are called ‘III-V semiconductors’. We grow them in a special way so they look like a hair brush – but each bristle is 1/1000th  the size of a human hair. One solar cell can have millions of these tiny bristles! The bristles are known as ‘nanowires’ and the hairbrush arrangement can be describes as an ‘array’. The advantage of using this nanowire array structure is that it uses much less material and that light can bounce between the nanowires (rather than being reflected away) which makes the solar cell even more efficient!

We then cover the nanowires in a plastic, and peel the entire thing off, so you have nanowires trapped in a plastic, that is thin enough and flexible enough to be rolled up into a reel. If we can successfully demonstrate these flexible solar cells, it will completely revolutionise the use of solar panels – both in urban and rural settings.