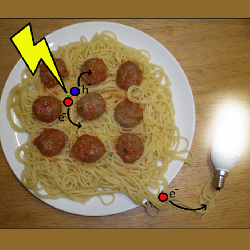 The electronic devices that we use nowadays are made of silicon- one of the most abundant elements on the Earth, yet very difficult and expensive to convert into a smartphone. Sphagetti-like polymer molecules could change all that.

For many years scientific research has been driven by a vision that in the future electronic devices could be made of cheap organic polymers using a simple technology similar to a regular office ink-jet printer.   Semiconducting polymers can be used to fabricate low-cost, large-area printed solar cells and novel flexible LED displays. However, the main problem with these materials is their internal structure- currently electronic devices are made of perfectly ordered crystals, such as silicon, whereas “wet” solution processing results in a disorganised spaghetti-like structure that is ineffective in transporting electrons.  The disorder has been a major reason of poor electronic performance- unlike in the perfect inorganic crystals the electrons were trapped and slowed down.

Our international research team has recently identified a new polymer that has a superior performance, yet its structure remains almost completely disordered. The polymer is extremely tolerant to any form of imperfections that result from the messy printing process. The unique combination of the ease of processing and fast electron transport makes the new polymer an extremely promising candidate for a new generation of cheap, mass-scale produced electronic devices.

Using a combination of experimental measurements and theoretical modelling, our research team has been able to investigate both the way electrons travel through the material and the position of atoms within the polymer structure. It turns out that although the polymer appears to be arranged in a fairly random order, the electrons are free to move almost as in crystalline inorganic semiconductors. This is likely to be a result of a design of a polymer molecule- it is made of a long backbone with carbon chains attached to it. It’s the unique rigidity of the backbone and arrangement of sidechains that affect the packing and electron movement. Based on their findings, the researchers are hoping to define a set of guidelines that may be used to design even better molecules in the future, which could be used in a new range of plastic electronic devices such as flexible smartphone displays or low cost solar cells.