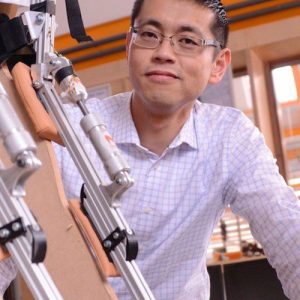 Fumiya Iida is a university reader at the University of Cambridge since 2018.  Previously he was an assistant professor for bio-inspired robotics at ETH Zurich (2009-2014) and a lecturer at Cambridge (2014-2018).  He received his bachelor and master degrees in mechanical engineering at Tokyo University of Science (Japan, 1999), and Dr. sc. nat. in Informatics at University of Zurich (2006).  In 2004 and 2005 he was also engaged in biomechanics research of human locomotion at Locomotion Laboratory, University of Jena (Germany).  From 2006 to 2009 he worked as a postdoctoral associate at the Computer Science and Artificial Intelligence Laboratory, Massachusetts Institute of Technology in USA.  In 2006 he was awarded the Fellowship for Prospective Researchers from the Swiss National Science Foundation and, in 2009, the Swiss National Science Foundation Professorship.  His research interests include biologically inspired robotics, embodied artificial intelligence, and biomechanics, where he was involved in a number of research projects related to dynamic legged locomotion, navigation of autonomous robots, and human-machine interactions.