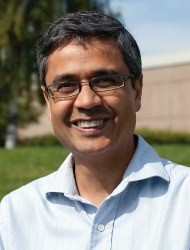 Bachelor (1988) in Physics from Imperial College, PhD in semiconductor physics on the fabrication and science of low dimensional structures in the group of Prof Mike Pepper at the Cavendish Laboratory, Cambridge (1991). In 2003 he also completed his MBA at Warwick University and has authored over 50 papers and holds over 20 patents.

Work Experience: After completing his PhD., Nalin joined Toshiba working in Japan at the R&D Centre. After a year in Japan, he returned to Cambridge to join the Toshiba Cambridge Research Laboratory, where his research related to semiconductor device physics and hybrid magnetic semiconductor systems. Nalin joined Cambridge Display Technology (CDT) a spin-out form the University of Cambridge in 2001. During his time at CDT he worked in a number of areas from device research, business development to project management. He returned to the Cavendish laboratory in 2011 to take up the role of Programme Manager for the Winton Programme.