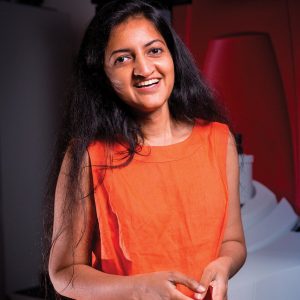 Suchitra holds an MS and PhD in Applied Physics from Stanford University, and an MBA from the Indian Institute of Management (Ahmedabad). She moved to the University of Cambridge as a Junior Research Fellow in Physics at Trinity College. After a period as a Royal Society University Research Fellow and University Lecturer in Physics at the Cavendish Laboratory, she is currently a University Reader in Physics. Suchitra was named as one of thirty ‘Exceptional Young Scientists’ by the World Economic Forum in 2013 and one of the top ten ‘Next big names in Physics’ by the Financial Times. She received the L’Oreal-UNESCO fellowship for women in science in 2013, among other awards including the Lee-Osheroff-Richardson Prize (2007); Young Scientist Medal in Magnetism (2012); Moseley Medal (2012); Philip Leverhulme Prize (2015); and Brian Pippard Prize (2015).