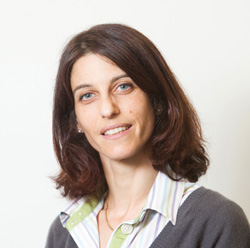 Caterina Ducati is Professor in Nanomaterials at the Department of Materials Science and Metallurgy. From October 2018 she has taken over from Paul Midgley as Director of the Wolfson Electron Microscope Suite.

Cate is a co-investigator on EPSRC’s Multi-dimensional Electron Microscope (MDEM) project led by Prof. Paul Midgley, and on the Faraday Institution’s Battery Degradation project, led by Prof Clare Grey. She is Co-I on the CARES C4T project. In 2010 she was awarded a European Research Council (ERC) Starting Grant to study third generation solar cells at the nanoscale. In 2014, she was awared an ERC Proof of Concept grant to study air purification through novel metal-metal oxide nanocomposites. She is involved in the European Network Enabling Science and Technology Through European Electron Microscopy 3 (ESTEEM3).

Cate was a member of the Electron Microscopy and Analysis Group Commitee of the Institute of Physics, serving as Honorary Secretary and Treasurer between 2012 and 2014, and as Chair between 2014 and 2016. She is a Committee Member of the Nanoscale Physics and Technology Group of the IoP.

Her PhD (1999-2002) was entitled “Nanostructured Carbon for Field Emission and Electrochemistry Applications”, and was carried out at the Electronic Devices and Materials Group, Department of Engineering, Cambridge. Her interest has focused on the synthesis of carbon nanotubes, and the study of their growth model derived from transmission electron microscopy analysis. She has also been involved in various experiments concerning the growth of metal-seeded nanostructured carbon films, silicon and silicon carbide nanowires, nickel and cobalt sulphide nanowires, titanium dioxide nanocrystals. From April 2003 she was a KTP Associate working on Programme 4151 between the University of Cambridge and Alphasense Limited. Then, between 2004 and 2007, as a Royal Society Dorothy Hodgkin Fellow, she worked on new properties of metal oxide nanostructures for electronics and catalysis. She held a Royal Society University Research Fellowship to study photon-stimulated spectroscopy and electron microscopy of nanostructures (2007-2012). From 2009 to 2013 she was a Lecturer in the Department. Between 2005 and 2008 she was a Sackler Junior Fellow, and then a Research Fellow at Churchill College until 2015.