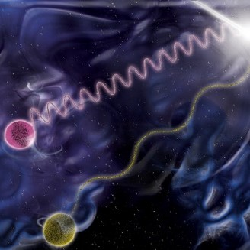 In order to measure light in exquisite detail, we are pushing the efficiency and capabilities of detectors ever closer to their ultimate limit.

What if we could retrieve all of the information contained in light from atoms and stars, one grain of light at a time? Rarely has such a goal, measuring single photons, or quanta of light, been the focus of areas of physics as diverse as astronomy and quantum communications. And rarely has the range of applications been so large, from solving the mysteries of the universe including the nature of dark matter to obtaining completely secure communications in optical fibers.

However, in order to measure light in such exquisite detail, we need to push the efficiency and capabilities of detectors ever closer to their ultimate limit. I study one of the promising frontiers, detectors made of superconducting materials: in environments close to absolute zero temperature, their resistivity is infinitesimal and noise therefore suppressed. Ultrasensitive detectors can be realized because each photon absorbed creates a large change in the electrical properties of superconducting sheets. Indeed, the energy required to affect the material’s electrons is thousands of times lower than in semiconductor detectors, such as cameras in smartphones.

My research focuses on a type of superconducting detectors, called KIDs, which have a particularly high potential for solving the current issues in detector physics. Fabricating them is simpler than most competing technologies and they can be manufactured and read out in large arrays using cheaper standard electronics. KIDs are currently far from attaining their theoretical maximum performance. Poorly understood noise and nonlinearity mechanisms have to be dealt with, but KIDs are already surpassing some capabilities of other detectors currently used in telescopes and quantum communications.

I work on creating experimental methods to carefully study the process through which photons are actually absorbed by detectors. Such information would be used to develop KIDs with a true ability to measure the energy and the number of photons absorbed within a few millionths of a second. Using entire arrays of pixels with these capabilities turned towards the sky, the atmospheres of exoplanets and the properties of far-away galaxies will be probed to extract their chemical compositions. Such discoveries will certainly place KIDs and superconducting detectors among a new generation of quantum technologies.