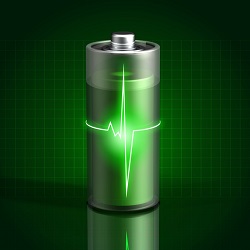 Over the last few decades lithium ion (Li-ion) batteries have become ubiquitous, powering everything from laptops and mobile phones, to electric vehicles. Their ballooning popularity is due to their ability to store more energy than previous technologies while also being smaller and lighter.
However, electric vehicles are not likely to become a viable alternative to combustion engines as long as they are using Li-ion batteries due to problems with cost, safety and energy storage by weight. A new battery is needed and magnesium-ion (Mg-ion) is the answer I am looking at.

Both Li and Mg-ion batteries rely on chemical storage of ions in a host material in the charged battery. The ion moves across the battery to produce electrical charge when needed. The capacity of a battery depends on how many ions there are and how many electrons they can give up to provide a current. Since Mg gives up 2 electrons compared to only one from Li Mg-ion batteries can have double the capacity of Li-ion batteries. A larger capacity means you could drive your electric vehicle twice as far before stopping to re-charge.

Another benefit of magnesium is its abundance; it is the 3rd most common element dissolved in sea water and can be obtained by electrolysis. This means supply is cheap and steady.

Magnesium is also much safer than Li, since Li-ion batteries can overheat and catch fire. This is caused by dendrite formation which is the growth of lithium “trees” inside the battery. When the lithium forest gets too dense the battery short circuits and releases all its energy at once. Magnesium is more like a tundra than a forest, so this dangerously quick release of stored energy won’t be an issue in Mg-ion batteries.

There are downsides though, because as the Mg ion has a higher charge than Li (Mg2+ compared to Li1+) it is more attracted to other components of the battery, meaning moving the ion across the battery is more difficult. This means that charging and discharging the battery is slower.
The types of materials which work well in a Mg-ion battery are also quite different to those used in Li-ion. I am working on how to build these materials and make prototype batteries that test the concepts so that we can truly challenge the Li-ion paradigm.