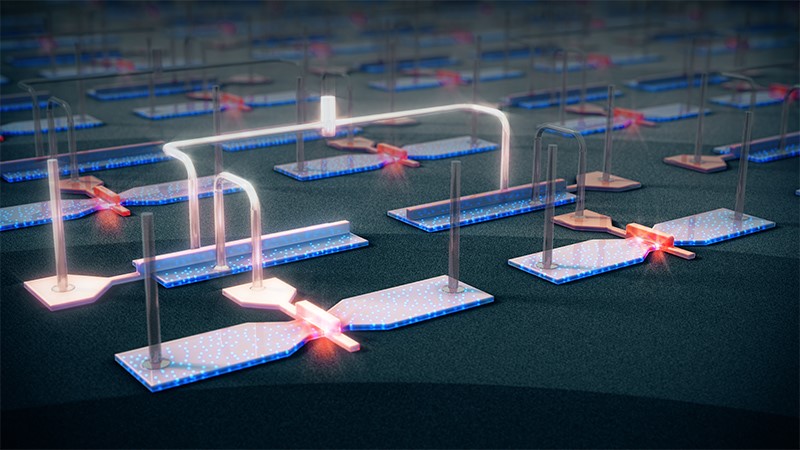 For the past 60 years, the performance of computers has doubled every 18 months – your smartphone today has 100,000 times more computing power than the computer used to fly the Apollo 11 mission to the moon in 1969! But this trend, known as Moore’s Law, is reaching the end of the line. The transistors used in today’s computer chips are only a few hundred atoms across, and engineers are struggling to make them any smaller, faster or more energy-efficient. Yet there are still many problems that today’s computers cannot solve – how can we continue to make progress?

Excitement has been growing over the past two decades over a new, completely different type of computer: Quantum Computers. They will be able to solve certain problems in just a few seconds, that would take billions of years to solve even on today’s largest supercomputer. Their power is derived, as the name suggests, from the strange laws of quantum physics. Instead of processing information using bits – digital ones and zeros – they use quantum bits (or qubits) which can be a one and a zero at the same time! (This is the principle of quantum superposition, famously illustrated by Schrödinger’s Cat).  Superposition allows a quantum computer to try all possible solutions to a problem simultaneously, getting to the answer exponentially faster than ordinary computers can.

Just as the performance of ordinary computers derives from packing billions of tiny transistors onto a silicon chip the size of a fingernail, quantum computers will also need millions of qubits to solve useful problems that scientists are interested in, such as discovering new medicines or modelling climate change (it’s unlikely you’ll ever be using a quantum computer for checking your emails, though!). So, we need to make qubits just as small and mass-manufacturable as the transistors used in today’s computer chips. Though many different types of qubit are being investigated worldwide – such as currents flowing in superconducting wires, or atoms trapped using laser beams – one technology stands out in terms of scalability: silicon qubits, based on almost the same transistor technology as is used in mass-produced laptops and smartphones.

By cooling these transistors to a few hundredths of a degree above absolute zero, we can trap and control a single electron in them. Electrons behave like tiny bar magnets – they have a quantum property called spin, which can point up or down – or, crucially, both up and down, making them ideal to use as qubits. But there’s one difficulty – how can we measure which direction the spin is pointing in? Unless we can measure the state of our qubits, we won’t be able to read out the answer our quantum computer has calculated for us!

The state-of-the-art method of doing this is to connect the qubit transistor to an electrical resonator, similar to the tuning circuit in a radio. Depending on the qubit state – spin up or spin down – the resonant frequency changes, just like tuning in to a different radio station. We can then determine the spin orientation by seeing which radio station the qubit is listening to! The electrical resonators are based on spirals of superconducting track, but these are thousands of times larger than the size of the qubits themselves, wasting the scalability advantage that silicon transistors qubits have. How can we shrink the resonators down to the size of the qubits? Can we make them out of silicon, right next to the qubits on the same chip?

These are the challenges I aim to tackle in my PhD. To replace the large electrical resonators, I’m designing, fabricating and testing a new type of device: nanomechanical resonators, which are tiny, vibrating silicon beams, 1,000 times thinner than a strand of hair. The principle of operation is the same as for the electrical resonators, but mechanical resonators are thousands of times smaller and far more compatible with fabricating next to the qubits. As with all research, there will be many challenges to overcome (measuring the frequency of these tiny beams isn’t easy!), but ultimately, this could help solve the problem of performing qubit readout in a scalable way, bringing us one step closer to building a full-size quantum computer.