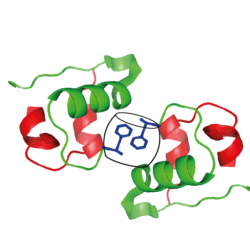 How Supramolecular Chemistry can control aggregation

The formation of clump-like  ordered structures in proteins has been associated with several diseases such as Alzheimer’s, Parkinson’s and type II diabetes, and is now thought to be a general feature of protein aggregation. There is considerable interest within the pharmaceutical industry in maintaining the integrity of protein-based drugs such as insulin during production and administration of the drug, however little is understood about the initial stages of aggregation.

My PhD is based on uncovering the supramolecular host-guest interactions between proteins or peptides, and special cucurbit[n]uril molecules. The cucurbit[n]uril family (written CB[n]) are a series of “barrel shaped” host molecules which are used to bind guest molecules, such as amino acids, to form larger constructs. The smaller “barrels” are capable of binding one guest while larger ones can accommodate up to two guests simultaneously. In this way, it is possible to “handcuff” molecules together in solution to harness or induce desired properties.

The focus of my research involves using the host-guest interactions of CB[7] and CB[8] to better understand the aggregation mechanism of human insulin. Current results indicate that on binding to the CB cavities, the natural aggregation pathway of insulin is interrupted and instead an immediate alternative aggregation pathway is observed. Under our protein denaturing conditions, the resulting aggregation process is temperature-dependent but yet remains fully reversible in the presence of CB[8]. On releasing the protein guest from the CB[8] host by increasing temperature, the insulin then aggregates irreversibly in a manner comparable to the native protein. We thus have a way to control aggregation by thermal incubation. From further studies, we hope to be able to control the aggregation of this protein during the storage and delivery processes to reduce the incidence of problematic insulin amyloid formation.