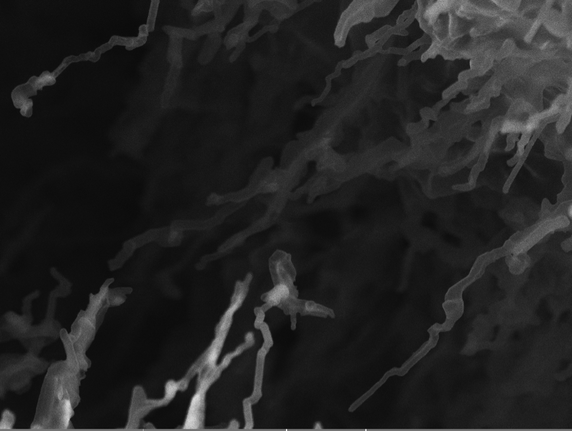 We all want batteries that allow us to listen to music for hours on our phone or an electric car that will drive miles after miles but at the same time we want the batteries to be long-lived and safe.

Most commonly, rechargeable batteries are so-called Li-ion batteries that consist of a cathode, and an insertion anode such as graphite. My work focuses mainly on an alternative anode material, lithium metal, an attractive anode for next-generation, high-energy batteries. The advantages of lithium metal are many. It has the most negative potential of all currently known electrode materials and has very low density, translating into the highest theoretical capacity among metals.

However, Li metal batteries face both a rapid capacity fade and serious safety issues. These are associated with an uneven electrodeposition of lithium ions on the Li anode. Instead of depositing a homogeneous layer onto the metal, the ions tend to form high surface area microstructures and ultimately dendrites. Lithium dendrites, needle- or whisker-like, can grow to the other side of the battery and short-circuit it, a potential fire-hazard. This can also happen when you charge commercial batteries too fast. A detailed understanding of the fundamental processes that lead to Li microstructural growth is necessary to develop new and effective strategies to mitigate dendrite growth.

The high reactivity of lithium metal also means that when immersed in an electrolyte, the electrolyte immediately starts to break down and form the solid electrolyte interphase, the SEI, until its thickness reaches equilibrium. However, microstructural growth creates a lot of new and fresh surface on the electrode leading to even more SEI formation that means the electrolyte is constantly being consumed during cycling and contributes to the capacity fading. Another harm comes when dissolving the microstructures where they can get loose from the electrode, creating ‘dead lithium’ flotsams that float around in the electrolyte.