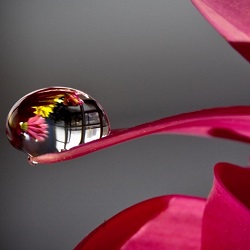 Hydrogels are best known for their ability to hold a large volume of liquid in a seemingly solid, crosslinked gel. Their uses range from super-absorbent materials and 3D cell scaffolds to contact lenses. Recent interest has been on developing “smart” hydrogels capable of responding to light, chemical and temperature, allowing for potential future applications in drug delivery systems, microfluidics and self-healing materials.

In an effort led by Alex Groombridge (NanoDTC Student 2013) of the Scherman Group in collaboration with the Abell Group, both in the Department of Chemistry, a new smart hydrogel has been synthesised on the interface of a droplet. Alex remarks, “the paper shows one of the first examples of forming a macroscopic gel from entirely small molecules based upon host-guest interactions, a form of self-assembly “. The interfacial gel is also responsive to its surroundings and can be disassembled using chemical inhibitors or light. This was achieved through the development of a crosslinking network based on two molecules. These molecules interconnect through a sort of molecular handshake, with three others forming a fractal lattice of interconnected molecules. This self-assembly mechanism leads to a self-healing architecture, but with a flash of light the molecules change their shape, breaking the handshake to destroy the crosslinks and disassemble the gel. The gel can also be disassembled by the addition of a molecule that binds to the glove more strongly than the lattice.

Microfluidic droplets are used in many different ways, from cultivating cells to acting as nanolitre chemical reactors, but droplet merging is a persistent problem, hindering the ability to incubate and study droplets in isolation. Surfactants can and are often used to inhibit droplet merging, but can interfere with the droplet experiment. The author demonstrated the self-assembly of their smart hydrogel at the interface of the droplet, and showed the inhibition of droplet merging without the use of any interfering surfactants.