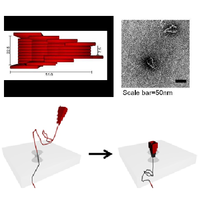 DNA makes a wonderful material for creating structures at the nanoscale.  It can be folded and shaped into three dimensions mimicking the traditional Japanese art of paper origami but at scales one million times smaller.  Nano DNA shapes made in this way mimic the intricate 3D structures of biological proteins and have a large range of potential applications such as biosensing and metamaterials.

My PhD work focuses on using DNA origami for improving the sensitivity of nanopore technology.  Nanopores are crucial to a sensing method for detection of single molecules by passing them through tiny pores (1-100nm in diameter) and measuring the changes in ionic current they cause as they move through the pore.  They hold great promise as a high throughput technique for a wide range of applications such as DNA sequencing and single molecule protein detection.  A great challenge in the field is the ability to control on nanometre length-scales the three dimensional geometry and surface chemistry of the nanopore.  DNA origami allows us to synthesise structures on this length scale with almost arbitrary control of geometry and nanometre positioning of functional chemical groups.