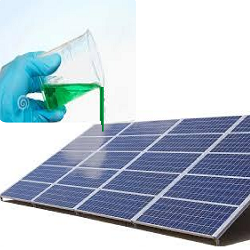 Some of the most widespread photosynthetic organisms on our planet – blue green cyanobacteria – can be used to make solar cells. We hope that such “living solar panels” can lead to a substantial drop in solar cell cost.

As part of my research I am using some of the most widespread photosynthetic organisms on our planet – blue green cyanobacteria – to fabricate solar cells. We hope that such “living solar panels” can lead to a substantial drop in solar cell cost.

With carbon based fuels not only facing a gradual depletion in the near future but also having devastating effects on our environment, researchers, technology developers and environment activists alike are looking for solutions how to save our planet. Owing to the incredibly high amounts of sunlight that our planet continuously receives (an equivalent of humanity’s yearly energy consumption in one hour) finding effective ways to convert the available light into electrical current is considered to be among the most promising directions. Yet in spite of their ever-increasing efficiencies and decreasing production costs current photovoltaics are still too expensive to have started dominating the energy market. Furthermore, they are frequently made of rare specialist materials available in limited quantities and they cannot produce power during dark periods.

To overcome the aforementioned limitations we have pioneered biological solar devices. In such biological panels semiconductors and other synthetic materials are replaced with photosynthesising cells, such as cyanobacteria. The wide availability of various photosynthetic organisms is an important factor in reducing the cost. In our recent work we made use of state of the art microfabrication techniques to push the limits of “living solar panels” and achieved the highest value recorded to date. Despite the extensive improvement, this value is still an order of magnitude smaller than for synthetic solar cells but we continue exploring novel ideas for enhancing the performance of our devices daily.

What is interesting about biological solar cells is that because of their ability to store energy (or rather that of the photosynthetic organisms) the devices can deliver a continuous power output during both day and night which is in stark contrast to non-biological solar cells. It is also worth noting that when using biomass energy the carbon accumulated in the biomass has to be consumed to be converted into energy. Yet in biological solar cells the photosynthetic organisms are acting solely as catalysts without being used up. The cells are a self-replicating and self-repairing catalyst and as such in addition to cheap cost the devices are likely to have longer lifetimes compared to their synthetic analogues.