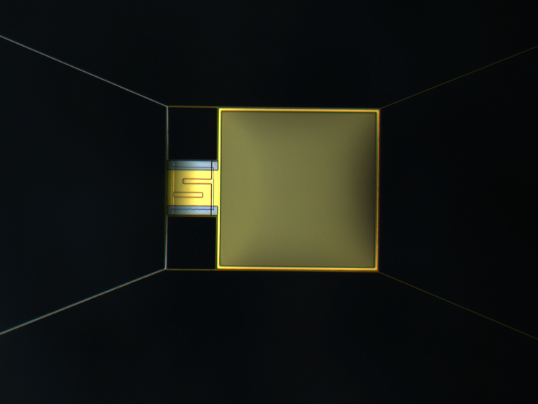 Astronomy is the mission to understand the origin and evolution of the celestial objects and phenomena in our Universe, from distant stars, galaxies and black holes, to planetary systems such as our own. Astronomers observe the Universe both from the ground and from telescopes in space, across the electromagnetic spectrum of light, from gamma-rays and X-rays through the visible and infrared to microwave and radio waves.

An array of 388 ultra-sensitive far-infrared Transition Edge Sensors, each suspended within a well.When we gaze at the night sky, we see visible light from hot, bright, nearby stars. However, the coldest and most distant celestial objects, as well as the dust that cloaks stellar nurseries, forming planetary systems and tumultuous galaxy cores, glow instead in the infrared.

Infrared radiation has wavelengths longer than visible light but shorter than microwave and radio waves. At least half of the energy ever emitted by stars and accreting black holes in galaxies is absorbed by dust to be re-emitted in the infrared. Galaxies at the peak of their growth, coinciding with maximum star formation and accumulation of material by supermassive black holes at their cores, are embedded in dusty clouds through which visible light cannot penetrate. Obscured in the visible, the shrouded universe from embedded hot young stars to gaseous planet-forming disks to active galaxy cores is therefore unveiled in the infrared.

Earth’s atmosphere absorbs infrared radiation, meaning that observing the Universe in the infrared can only be achieved from telescopes in space. Like a camera, a telescope has an array of pixels, or detectors, that absorb electromagnetic radiation in the wavelength range of interest to create an image or spectrum of an object. Detecting the faintest objects in the universe and distinguishing the most minute differences in wavelength requires detectors of extraordinary sensitivity for the next generation of space telescopes.

My research focusses on the development of ultra-sensitive detectors for the far-infrared space telescopes of the future. These detectors, known as Transition Edge Sensors (TESs), are fabricated using superconducting materials rather than the semiconductors used in conventional camera CCD pixels. As a superconductor is cooled to below its transition temperature, its electrical resistance drops abruptly to zero. The sharp decrease in resistance with temperature within this transition enables a TES to act as an extremely sensitive thermometer, where changes in temperature as electromagnetic radiation is absorbed allow the absorbed power to be precisely determined.

A single Transition Edge Sensor where the small gold square is the superconducting film, the green square is an infrared absorber, and four extremely narrow bridges suspend the TES from the surrounding support.

A single ultra-sensitive TES is capable of detecting an LED blinking for one second at a time, at a distance of over 20 km. TESs have been developed over a number of decades and have been successfully adopted in ground-based telescopes to detect wavelengths other than infrared, for example microwave, making them compelling candidates for the future deployment in space.

TESs are only a few hundred nanometres thick, over 200 times thinner than a piece of paper, with the thin superconducting film around 5 million times smaller than a postage stamp. To achieve their exceptional performance, TESs must be cooled to around 100 mK, -273 °C, and isolated from their surroundings on tiny islands suspended by bridges only 200 nanometres thick and less than 2 microns (0.0002 cm) wide.

I study the physics underlying the behaviour of TESs to identify design modifications which will further enhance their performance towards that demanded by the next generation of space telescopes. How do we, for example, predict the sensitivity of a TES, and how quickly it reacts to changes in the amount of infrared radiation that is being absorbed? How do we ensure that every TES in an array of hundreds behaves according to strict specifications? Can we incorporate microscopic rings into the bridges that support a TES to filter out the vibrations that transfer heat to and from the sensor to better isolate it from its thermal environment? How should we design the surroundings of TES arrays to shield them from magnetic fields, ionising radiation and unwanted stray light, to ensure that optimal sensitivity would be achieved during operation in space?

TESs are the chosen detector technology for the far-infrared instrument on the proposed space telescope SPICA, the SPace Infrared telescope for Cosmology and Astrophysics. SPICA has been selected by the European Space Agency as one of three possible candidates to be built and launched around 2030, with detailed study taking place over the next few years before a final selection is made. This is therefore an extremely exciting time to be a student in this field, helping to design the microscopic for the study of the incomprehensibly vast.