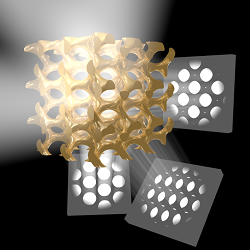 If light is music then matter is the orchestra, and each instrument is just a different form or structure of that matter. However, in everyday life, we’re stuck listening to the classics; the optical equivalents of Mozart and Beethoven. So if, as physicists and engineers, we would instead like to “listen” to something else, to invent a whole new style of “music”, then we have to change how we structure matter. Even invisibility (which would definitely rock) would be possible if we find the right shape in which to arrange our atoms and molecules.

We give a special name to matter with such a carefully designed structure, a “metamaterial”. The very name suggests this new artificial material interacts with light in a way which is “beyond” anything found in nature. Indeed, if we get the structure of the metamaterial just right, we can get light to do some incredible things, either allowing us to resolve the finest details of an object or, hide it completely from view.

However, it is important that the size of the structure is small enough, hundreds of millions of time smaller than the objects we’re used to. Only by controlling matter on this length scale, the nanoscale, can we hope to fully manipulate light as we wish. Unfortunately, such precise control over tiny matter is extremely difficult and, although possible, is currently both time consuming and costly. So why not make matter do all the hard work and “self-assemble” into the structures we want? Well, we would describe the separation of oil and water after mixing as self-assembly but the resulting structure is nowhere near small enough for what we want. So we instead bond together two long molecules which otherwise like very much to stay apart. This yields a structure at precisely the length scale we’re after; it’s just the molecules’ way of keeping like ends together and different ends apart.

So, if light is music then matter is the orchestra, and each instrument is just a different form or structure of that matter. But why not let there be some new instruments, which they build themselves, and which play us music we can still only scarcely imagine?